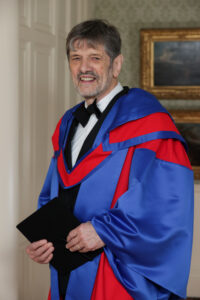 Micheal O’Siadhail has been a leading Irish poet for several decades (as shown by the Arts Council award to him in 1998 of the Marten Toonder Prize for a distinguished career in literature) and his 2018 work The Five Quintets cements his status as arguably Ireland’s greatest living poet. The poetry in his Collected Poems (2013) has already been the subject of much appreciative critical attention by critics and commentators. In addition his very personal poetry (as in The Chosen Garden, Our Double Time, Love Life, and One Crimson Thread) alongside his more public poetry (as in A Fragile City, The Gossamer Wall: Poems in Witness to the Holocaust, and Globe) showing an astonishing range; Notable also is his technical mastery of many classical poetic forms (above all the sonnet), together with his invention of new forms; his linguistic range (he is fluent in Irish, French, Norwegian, German, Welsh, Icelandic, Japanese, and Spanish, and has conversational Latvian and Catalan), which is seen above all in his collection Tongues; and his polymathic knowledge of many fields and cultures. All of those culminate in The Five Quintets. That is five long poems on each of five themes: Making (on the arts); Dealing (on economics), Steering (on politics), Find- ing (the sciences), and Meaning (on thought in many spheres, including philosophy and theology).